A few weeks ago, I was in Junction, Texas at a Texas Youth Hunting Program hunt.  When we arrived on Friday, I was excited to meet the other hunters and guides. Also, we saw a herd of deer right after we drove into the location. Compared to last year, it was obvious the deer were healthier. This was very exciting!

During the two hunts I have been on, Fridays were for getting to know the hunters, guides, and for practicing. During practice time, the hunters shoot at a target and determine if they are ready to hunt. Usually, it is after this point when the hunters open up. At this hunt, Emily and I got along with the other girls instantly. We all cooked the first meal together and we were able to talk a lot during this time.

On Saturday morning, I was in a blind with my dad. Before daylight, we heard deer in the tree line. The feeder was about 100 yards in front of us, so we definitely couldn’t see them. As the sun was slowly making it’s way up, I definitely saw a rabbit. Now for the other “deer” I saw, they were just shadows… Anyhow, once the sun made it’s full grand entrance, the deer came out. We were surrounded by deer; soon, we had deer in front of us, behind us, and to both of our sides. I’ve never taken such slow deep breathes in my life! There were several spikes and other small bucks. I guess me killing Casanova (the 10 pointer from last year) must have allowed the other bucks to grow out and start their own dominances. We also saw a few Axis deer off to the side! They were not where I was comfortable shooting them, so I waited for them to come further out. They never did. I did find two eight pointers and I decided to go for the one with the largest body. It was also obvious that he was the dominant one of this herd. The feeder went off at 0800 and he just stood beneath it eating. He was constantly harassing the does that were trying to eat. This buck was an especially smart one. I assume he knew we were there as he always kept either his head or butt to us. When I had my perfect broadside view, I took the shot. He fell right under the feeder.

The other does came out fairly quick. They were very skeptical of us. They kept stomping at us waiting for a reaction. I gave them one… just not the reaction the doe wanted. But before I get ahead of myself, I am going to tell y’all what I accomplished at this hunt. This may not seem major, but I shot her while she was angled towards me. I had only ever shot deer while they were broadside. While I was aiming, I was wondering where I should hit. In my head, I tried to picture a doe with one line going through the heart at broadside then I added more angled lines for representation. This is hard to explain, but I think y’all understand that I tried to use angled lines made from the same entry point. I took the shot where I thought would be best. The shot entered just in front of the shoulder and it exited in the ribs. I about started panicking when she ran 20 yards. All my shots before this one were heart shots, so they instantly dropped. I was scared that I gut shot her, but I did have a little faith restored when she dropped. I took my binoculars and watched to see if she was still breathing. I felt a little better when I saw she died quickly.

Soon after, time was over and we checked on the deer. Everyone knows I beelined for the buck! I was not ready to see the doe yet. When we arrived to the feeder, I saw I had yet another heart shot. His body was just as big as Casanova’s from last year! I was having some major flashbacks. Next, we walked over to the doe. For some reason, I was scared she was still alive. That’s how terrified I was about her not dropping. As I saw earlier, she was dead.

That afternoon, I was in the blind where I shot Casanova last year. Also, I had the same guide that was with me. I was hoping maybe I could have the same luck I did last year. Sadly, I didn’t get that luck. I did see a herd of Axis, though! This was the second time I saw Axis during this trip. They never came into my view. However, two pairs of does came into my sight. I decided not to shoot them because they had yearlings with them. Also, I wasn’t too set on shooting another deer because I didn’t want to tag out. Then comes out a doe that looked different from the others. You could just look at her and be like, “Hm, something is different.” I had no idea what she was at the time, but I did notice that the whole one side of her tail was black. Also, she was more grey than whitetail. Another strange thing I noticed was she was alone. She was eating in front of us for over an hour. No other deer came with her. Two more things I noticed: her ears were more pointed and her belly was not white like a whitetail. I did some research and found that she looked like a blacktail deer! This is surprising and hard to believe because they are not in this area.

The next morning, I was hunting with my dad again. This is the last morning of the hunt. I decided early on that I was not shooting a deer unless it was an Axis. A few whitetail spikes and does came out. Just like what other people said about this blind, something was scaring them away. The deer kept looking off to the side where we can’t see. They soon ran off. We heard Axis barks and I was instantly excited. I waited for them until it was time for us to stop hunting. Earlier, we heard shots and I was sure at least one of them was Emily. We drove to pick up Emily and her guide hoping to see a deer or two. I was even hoping maybe she shot one of the Axis! Turns out the shots didn’t come from her.

Just like the last hunt, this hunt was very enjoyable. I had a great time talking to everyone and I appreciate all the hunting stories! I learned more about hunting and what the TYHP is for. The Texas Youth Hunting Program gives youths the opportunity to hunt and learn several things about hunting including wildlife conservation, harvesting, and tracking. So far, I have had a blast at every hunt! 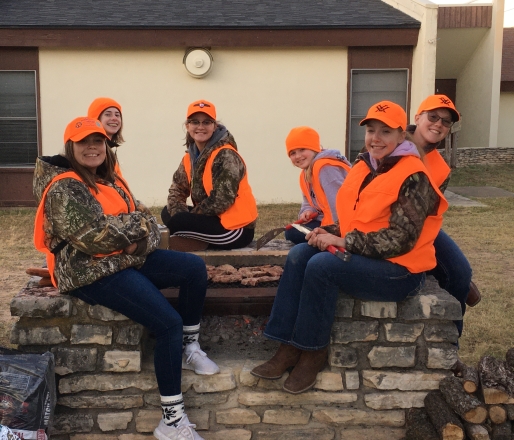 Our deer on the first morning. 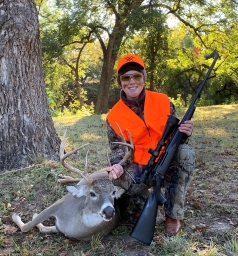 One thought on “My Second Hunting Trip”